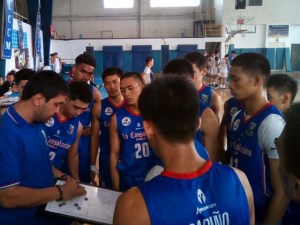 MANILA – It will be top seed La Consolacion College going up against defending champion PATTS College of Aeronautics for the 10th Inter-Scholastic Athletic Association (ISAA) Seniors Basketball title after they disposed of their separate rivals to end the semifinal round Monday at the LCCM Gym.  The best of three championship series will commence on November 9 again at LCCM.

PATTS avoided a major endgame collapse to take out rookie team Trinity University of Asia via a two-game sweep, 62-57.  In the next game, LCCM eliminated Philippine Women’s University, 49-43, to also sweep their best of three series.

Wide body Leonard Mengoy stepped up big time as he led the Seahorses with 16 points plus a lot of hustle and defense not seen on the score sheets.  Freshman sensation Mark Jayson Morada supported him with 12 points while Norman Torreno and Aldrich Lopez had 10 points each.

The Seahorses threatened to blow the game apart as they scored eight straight to end the third, 47-36, behind a basket from Morada, a Torreno triple and capped by a three-point play by Mengoy.  PATTS enjoyed their biggest lead, 56-40, but the Stallions came galloping back behind to within eight, 50-58, but free throws down the stretch from Morada and Torreno saved the day.

In a low-scoring affair, Gabriel Latoreno completed a three-point play with 3:55 left in the third to restore the lead to the Blue Royals for good, 27-25.  From there, the home squad held form via timely baskets from TJ Carino and Jessie Bardaje with team leader Thurlough Grealy assuring the win from the free throw line with 10 seconds remaining after PWU’s Ivan Andaya scored at the 20-second mark to threaten for the last time, 43-47.

Bardaje and Carino paced the Blue Royals with 10 points each with Carino pumping in seven during the crucial fourth period  Grealy added nine points while Latoreno finished with seven points.

A long-time television sportscaster, magazine writer, photographer and college professor from the Philippines finally gives blogging a try after more than a decade of on-line presence. Read on folks!
View all posts by Anthony E. Servinio →
This entry was posted in Basketball, ISAA, Sports. Bookmark the permalink.

Readin' , writin', and getting the numbers on athletes, sports and many action-packed events

The greatest WordPress.com site in all the land!